[Kenny and Courtney Dalen became homeowners at the ages of 23. Read their tips on how they achieved their goal of homeownership and how you can do the same.]

Millennials. We’re known by many names and perhaps even more generalizations. From “adult-children” to “avocado toast aficionados,” the one term you won’t find often tied to this tech-savvy generation is “homeowner.”

It’s not necessarily that millennials have a harder time buying homes, but rather, they buy into the belief that homeownership can’t be achieved for their generation, whether due to student loan debt or confusing concepts of credit.

Kenny and Courtney Dalen are about to celebrate their second year of homeownership. Married May 2015, they became the proud owners of a Royal Oak, Michigan residence in February 2016, Kenny at age 22 and Courtney, 23.

Kenny went to Michigan State University for a degree in Packaging and is now a Packaging Engineer at The Bottle Crew; Courtney, a graduate of the nursing program at the University of Detroit Mercy, now works as a nurse at Beaumont Hospital – Royal Oak. They decided to embark on the journey of homeownership largely due to their desire to invest in a place they owned.

The couple was able to save their goal down payment amount by living for a little under a year in an apartment and being vigorously frugal.

“We had a financial game plan,” Kenny said. “We knew how much we made, how much we wanted to spend and the timeline of when we thought we’d have enough to put down a down payment. We treated the apartment as a place to stay and not as a home. And by doing that, we were able to save.”

What follows are seven tips they learned from the home buying process, along with insight for their fellow aspiring home buyers who are interested in following the same route.

Saving for a down payment was easier said than done, the couple recalled. After all, it’s hard to avoid the student loan debt that finds its way into the lives (and bank accounts) of college graduates. However, the Dalens revealed a method that worked, and continues to work, for them.

The snowball effect – a term coined by financial expert Dave Ramsey – is the idea of paying off debts in order of the smallest to largest. As each debt is paid in full, you apply the money you were paying on that debt toward the next smallest balance and repeat until you’ve paid off all your debts.

Additionally, the couple had a steadfast desire of homeownership, which motivated their spending and saving habits.

“Stick to your budget,” urged Kenny. “Determine what you bring home in a month, along with your fixed costs, and then give yourself a budget for how much fun you can have. Then save the rest.”

It might be hard to get started on savings, especially if you’re facing student loans or any other kind of debt. However, by identifying your goals for saving, along with the areas of your budget that can be trimmed down or adjusted, you’re on the right track to saving up for your future goals.

Tip 2: Stick to Your Budget

Even after achieving their down payment goal, the Dalens still found that they had a long way to go before purchasing a home.

After falling in love with their now home-sweet-home and making an offer at the top of their budget, the Dalens found that the sellers originally wouldn’t budge on their listing price, which fell a couple thousand over the couple’s highest offer.

“We had to walk away, even though we were in love with the house,” Courtney recalled. “We were at our maximum and we wouldn’t go any higher.”

Fortunately, the sellers came back and accepted their original offer, and after the appraisal came back at only $200 more than what the Dalens originally offered, they were glad they stuck to the budget.

“Stick to your guns!” Kenny exclaimed. “Don’t feel intimidated if people try to counter your offer. If you think the home is not worth what they’re asking, then don’t change your budget.”

The best way to determine a reasonable offer amount on a home is by having your real estate agent run comparables in the home’s area and determine the price of recent sales. This can give you a good idea of how much to offer and when it’s time to stick to your guns.

During the home buying process, there are a ton of terms you’ll encounter that could be confusing or even deceiving.

For example, when the Dalens got their final closing statement, they couldn’t help but chorus, “What the escrow?”

“We originally thought an escrow was an extra charge and we were getting screwed over,” Kenny recalled. “Really, it was just an extra service provided by the mortgage company that helped us pay our home insurance and taxes on time.”

Escrow is a service provided through mortgage lenders that bundles your mortgage payment, homeowners insurance and property taxes into one monthly payment.

While you don’t have to opt in to an escrow account, it could be a more convenient way to divide your homeowners insurance costs and taxes over 12 months so you’re not paying it all at one time.

It’s important to learn the jargon you’ll encounter along the road of homeownership. It can make the mortgage process less intimidating and provide even more clarity on the timeline of your home purchase.

Real estate agents, contractors, inspectors … there’s a lot of people you’ll come across during the home buying process, so it’s important to take time and do your research on these individuals.

The Dalens asserted the importance of trust and communication when it comes to working with real estate agents and contractors and had a few qualities they took into consideration.

“We wanted to go with a younger REALTOR because they could understand our situation,” Kenny explained. “We also wanted someone we could trust because we were so new to the process.”

“Get a REALTOR you can easily communicate with and trust,” Kenny asserted. “You want the knowledge and the experience, but if you can’t communicate what you want in a home, you’re either going to be discouraged or you’re not going to find what you want.”

Tip 5: Applying the Art of Negotiation

When the Dalens started the home buying process, the ball was in their court, which is to say they were looking in the middle of winter when it was a buyer’s market, giving them an advantage in the negotiation process.

After the sellers conceded to the Dalens’ original offer, it was time to get an inspection and appraisal. This was a surprising process, they reflected, as their home was older, built in 1913. Kenny recalled receiving a 40- to 50-page document of everything that was found in the home inspection.

“When we got the inspection back, I was baffled,” Kenny said. “What we didn’t know is when the inspector comes to inspect the home, he has to compare it to today’s code. The house was built in 1913 and obviously followed a different code. You think it’s terrible, but you have to remember when it was built compared to the code today.”

However, there were a few things the couple couldn’t ignore, like the fact that the furnace was blowing out carbon monoxide.

During the inspection period, a home buyer can request the seller fix anything that came back in the report as needing attention, or the buyer can ask the seller to lower the sale price of the home. The Dalens recall this process of negotiation and how they were able to get a reduced cost on the house for the same amount it would cost to replace the furnace, which ended up amounting to a couple thousand dollars.

“Stick to your guns in the negotiating process,” Kenny asserted. “Don’t be afraid to negotiate, because it’s a business transaction, not personal.”

Tip 6: Learn to Do It Yourself

Along with his career at The Bottle Crew, Kenny owns a small woodworking business on the side dubbed Valley Custom Woodworking.

The business was born from a desire to DIY, not only to save money, but also to have the satisfaction and empowerment that comes from doing it yourself. Kenny’s degree is in packaging engineering, which employs the idea of how to efficiently fit the most into the smallest space at a low cost. He was able to take this mindset and couple it with his woodworking skills, to make most of the furniture for their home.

“We waited for him to learn how to build certain things,” Courtney reflected, “like our kitchen table, TV stand, shelves and our backyard pergola.”

Just in time for summer, the couple completed a project in their backyard: a pergola, sitting area, fire pit and outdoor table.

“I have a DIY attitude when it comes to fixing and building things,” Kenny said. “That, coupled with woodworking, drove me to build our own furniture. And that grew my passion for woodworking because I could see something being fixed with my hands.”

Kenny mentioned that everything he builds in his house serves a purpose and an aesthetic, going back to the idea with fitting the most into the smallest.

“We want our next home to be something we can renovate on a larger scale,” Courtney revealed.

A concept that determined the Dalens’ Do It Yourself (DIY) home improvement projects is their ROI (return on investment). As this is their first home, they considered their goals as homeowners before they began any projects.

“When you’re looking for a house, think about what you want to get out of the house,” Kenny advised. “Do you want this house to be like a cheap apartment that is just a placeholder, or do you want to have a place that’s going to last a while?”

The couple disclosed their goals for their first house as a more long-term investment.

“This is going to be our home for about the next 10 years or so,” Courtney explained. “We wanted to invest in a home where we didn’t have to move once we started having kids.”

One of the concepts the couple has to consider is the likelihood of their home being sold after they decide to move. Currently, their neighborhood is facing an epidemic where all the older homes are being torn down for new builds.

Since the Dalens won’t know what purpose their house will serve in the future, they’re holding off on any extreme home renovations that might not reap a return in the future.

Their one exception, however, was the pergola project – something they knew they’d be able to get an ROI in time and enjoyment.

“When you’re doing home renovations, you have to consider what your return will be,” Kenny said. “Maybe you won’t get it back in money, but you can enjoy it for the time you’re there.” 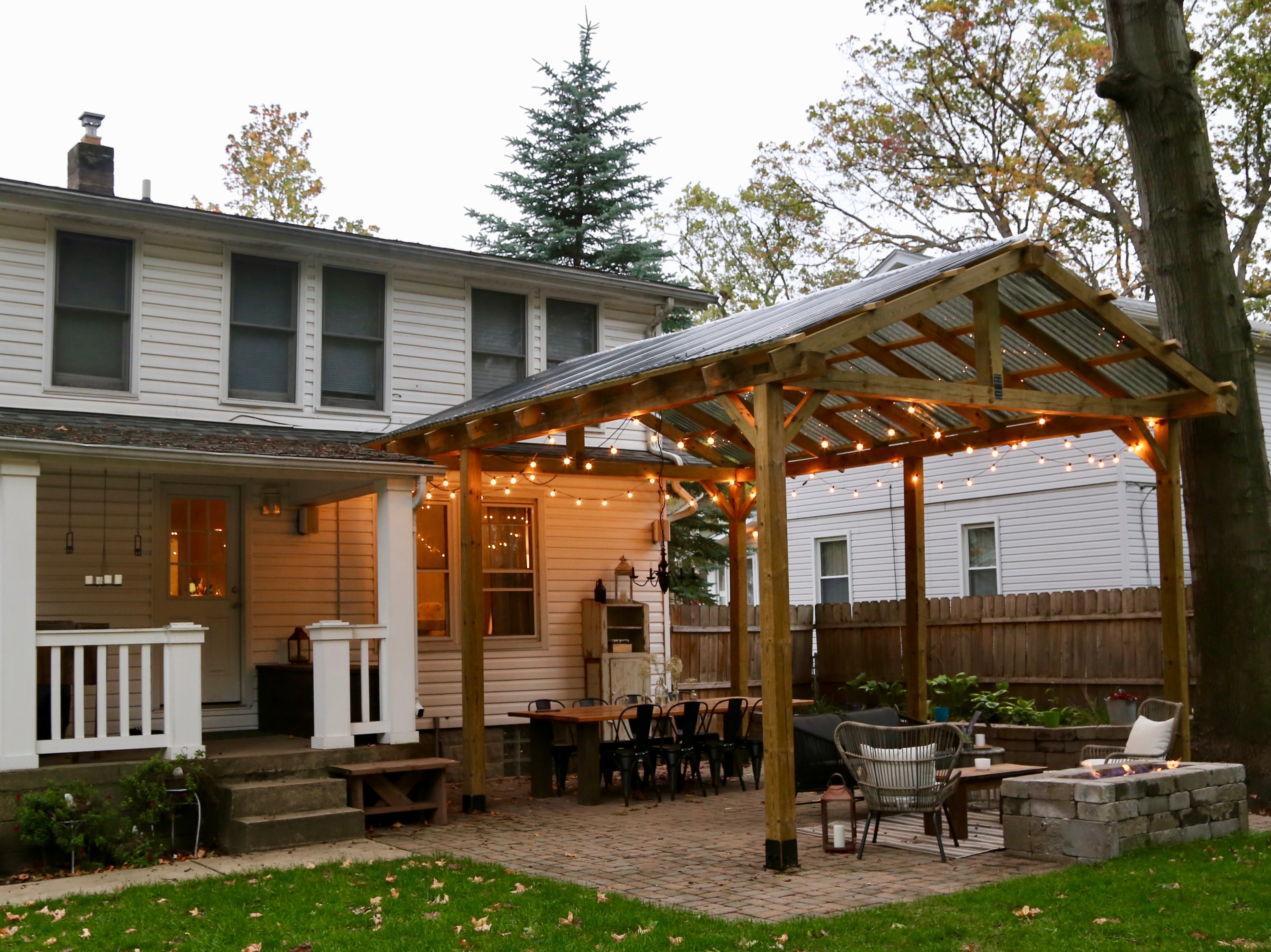 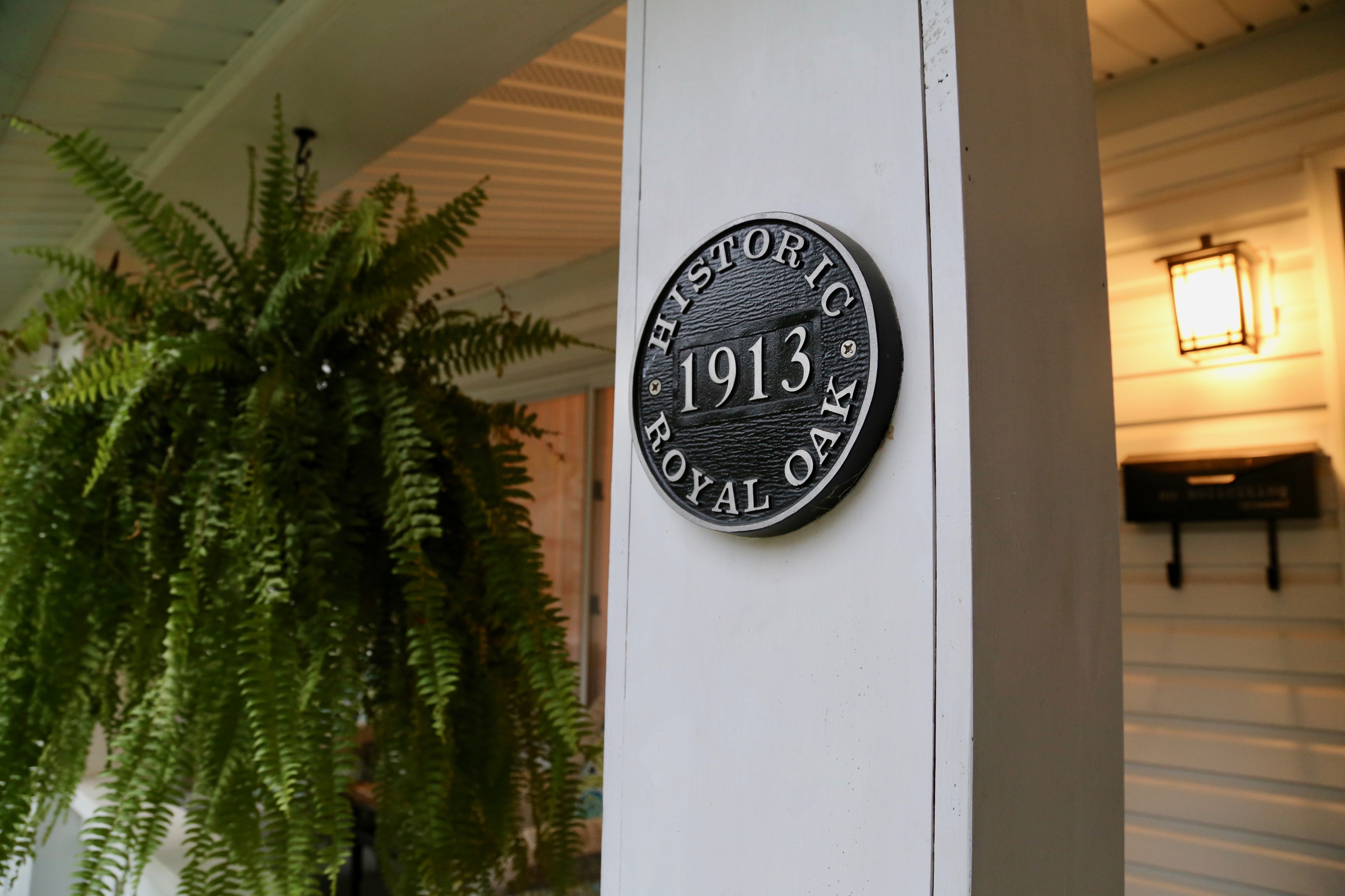 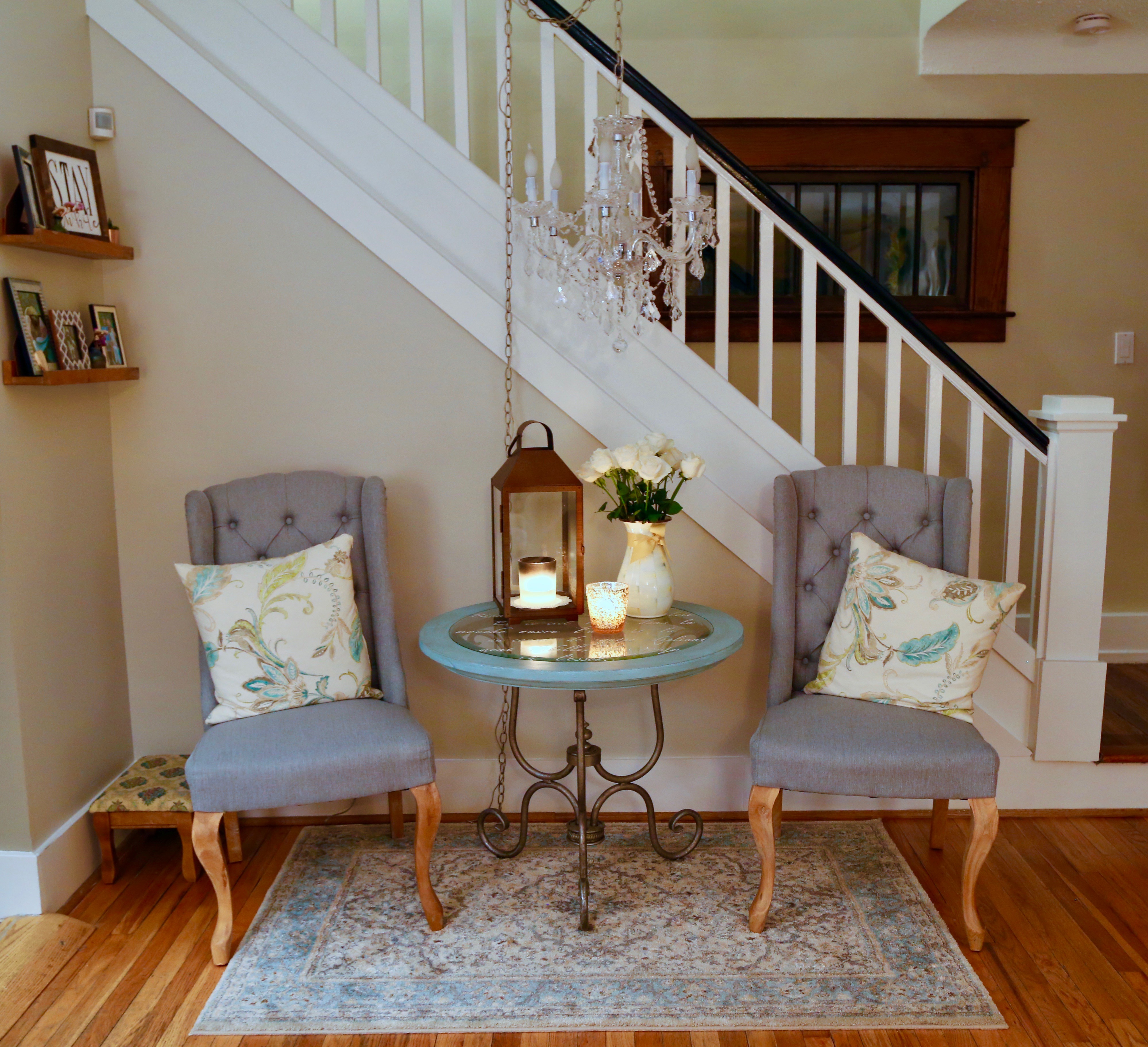 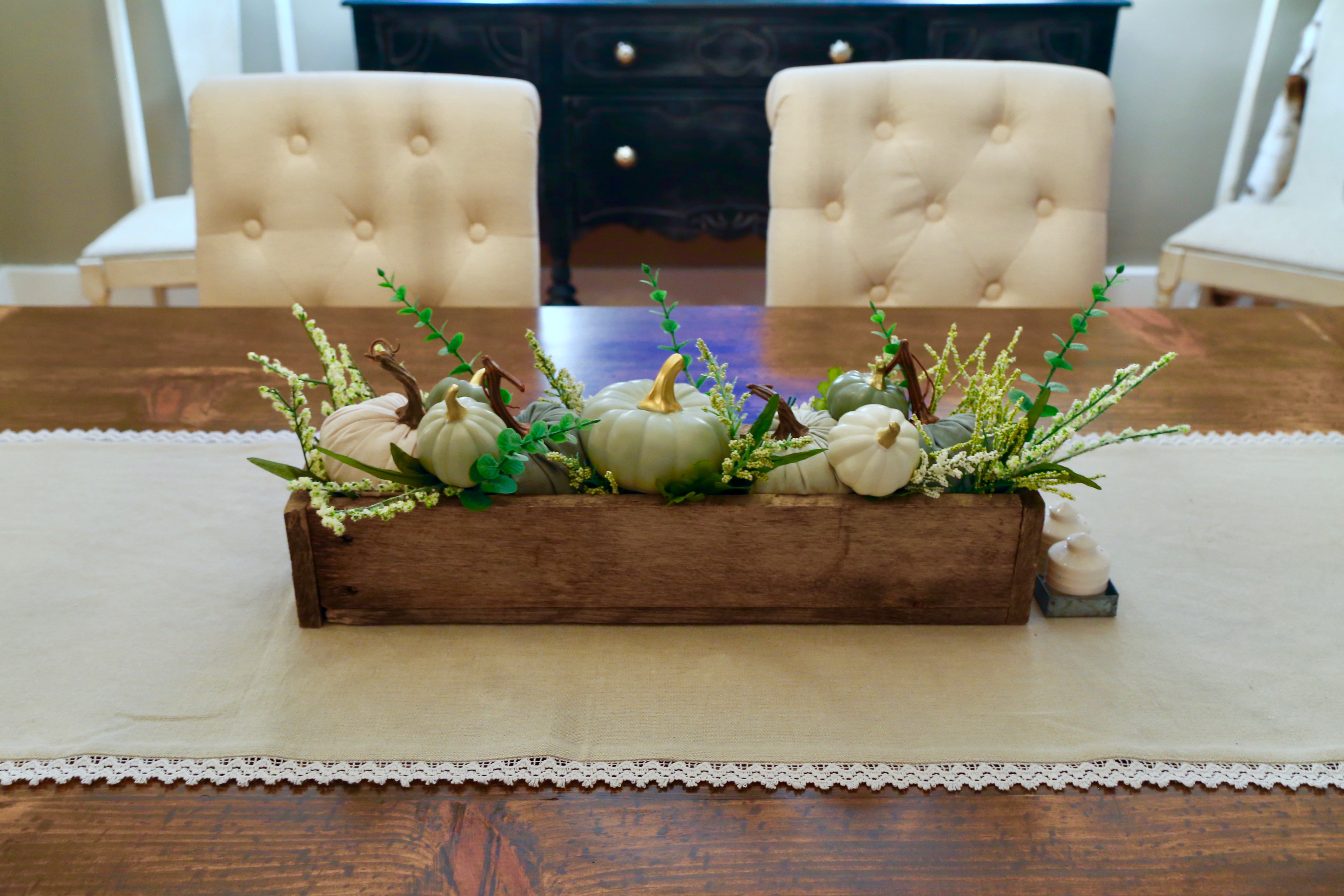